Young Driver AMR on the chase for Amateur-Championship 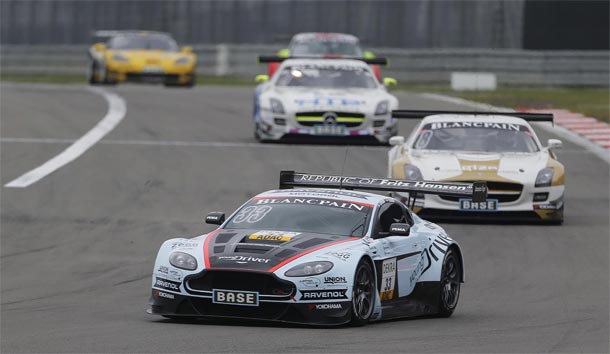 Paderborn, 27th September 2012 / ADAC GT Masters - Final round of the ADAC GT Masters and title fight for Young Driver AMR: This weekend, Germany’s premier sports car series ends at Hockenheim and Young Driver AMR is still in contention for championship honours in the amateur-driver class. Kristian Poulsen from Denmark is currently second with two races at go and takes a shot at the title at the Hockenheim together with fellow countryman Christoffer Nygaard in his Young Driver AMR-Aston Martin Vantage GT3. After a strong performance in the most recent round at the Nürburgring, the brothers Ferdinand and Johannes Stuck also looking forward to end their season with a good result in the second Aston Martin V12 Vantage GT3 entered by Young Driver AMR.

Young Driver AMR travels with mixed emotions to Hockenheim. „As our test and development season with the Aston Martin V12 Vantage comes to an end, Hockenheim is again a new track to us and thus, it’s difficult to make any predictions“, Young Driver AMR-team principal Hardy Fischer says. „After the most recent round at the Nürburgring, the ‘Balance of Performance’ has been amended for a wide of range of competitors except us, this makes it even harder to predict. Hockenheim consists of longs straights and the twisty Motodrom. Duo to the BOP, our V12-engine is handicapped on the straights, but we should do well in Motodrom. Our focus this weekend is clearly to win the amateur-championship for Kristian.”

The amateur champions of the ADAC GT Masters comes down to the wire at Hockenheim between championship leader Swen Dolenc in a Porsche 911 and Kristian Poulsen. The Young Driver AMR-driver is currently second with a gap of 24 points, while there are still 50 points for the winner on the table at the last two races.