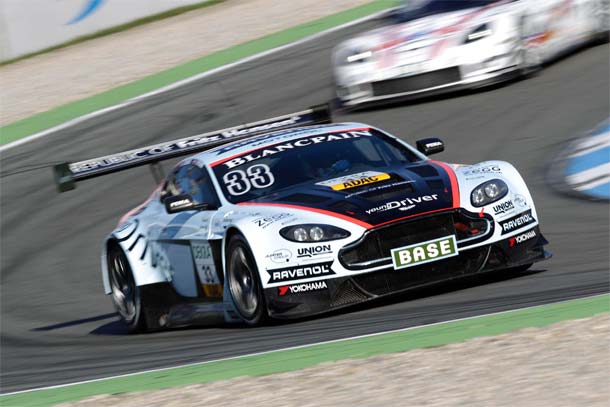 Paderborn, 3rd October / ADAC GT Masters - Young Driver AMR ends the 2012 season on the top step of the podium: At the final round of the ADAC GT Masters at Hockenheim, Kristian Poulsen and Christoffer Nygaard ensured in the Aston Martin V12 Vantage GT3 a conciliatory end of the season. Kristian Poulsen took his fifth victory in the amateur class in the final race of the season and finished as runner-up in the amateur championship.

After a successful weekend at the Nürburgring two weeks earlier, Young Driver AMR travelled to Hockenheim with mixed emotions, as the team expected that the high-speed Formula 1-track wouldn’t suit the Aston Martin V12 Vantage GT3. Due to the ‘Balance of Performance’ (BOP), the Aston Martin has it run with vey small air restrictors, which limit the power output of the six-litre-V12-engine. On a track, where power is crucial, this is certainly not a bonus.

The first race ended early for the two Danes: Poulsen retired after an issue with the brake. In the second race, Poulsen/Nygaard had a trouble free run and only briefly missed the point ranks when they finished in eleventh position. As the highest ranked amateur driver, Poulsen scored a fifth victory in the very last race.

"The victory in the amateur class is a very nice way to end our season“, Young Driver AMR team principal Hardy Fischer says. "It was a relief for the entire team, who had to work very hard when the car was damaged after a brake issue in the first race. I must sincerely thank the entire team for the season. All mechanics and engineers have always done a good job. Although things do not run quite perfect for us sometimes during this season, I could always rely on my team. Our season is over, but in 2013 we will attack again and looking to win again.“

Ferdinand and Johannes Stuck had to miss the final round at Hockenheim after a consequential damage of an accident in the previous round at the Nürburgring.