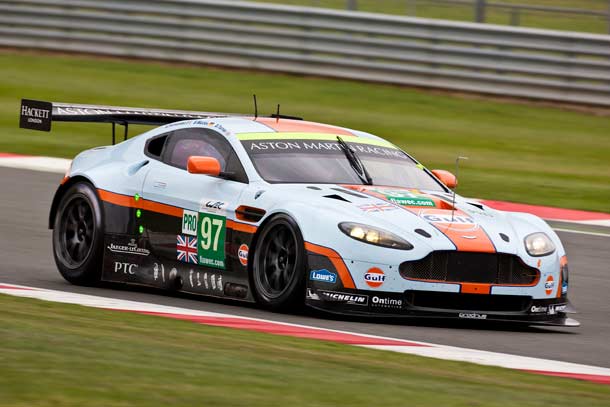 Aston Martin Racing will resume its FIA World Endurance Championship (WEC) GTE Pro campaign this weekend (14th/15th September), where it aims to continue its run of podium successes at the fifth round of the championship, the Six Hours of São Paulo, Brazil.

The #97 Aston Martin Vantage GTE heads to Brazil fresh from the Six Hours of Silverstone, where it achieved third in the GTE Pro class, leaving Aston Martin Racing second in the overall team standings with four rounds of the championship remaining. A podium in São Paulo would be the third in succession and fourth of the season for the team, which celebrated third place at both the 24 Hours Le Mans, France, back in June and in the 12 Hours of Sebring, USA, at the start of the season in March.

At the Autódromo José Carlos Pace, Interlagos, located on the outskirts of São Paulo, the Gulf-liveried car will once again be piloted by Aston Martin Racing works drivers Darren Turner (GB) and Stefan Mücke (D) who are both excited to be back at a circuit that is steeped in motor racing history.

Darren Turner comments: “I’m really looking forward to racing at Interlagos again. I’ve had great races here in the past and really enjoy it – its one of the great old-school circuits. The elevation changes and challenging corners make it interesting and exciting to race and there is an amazing atmosphere there – even on a quiet test day, there’s something quiet (quite) special in the air. We were really pleased with the car at Silverstone – it was quick and reliable – and the team performed perfectly all weekend.”

Team-mate Stefan Mücke adds: “I've only been to Interlagos once and that was two years ago with the Aston Martin DBR9 GT1, but I’m looking forward to returning - it is a great track with a lot of famously difficult corners, which I really enjoy. I was really pleased with the car at Silverstone. The pace and reliability allowed me to take part in a fantastic chase at the end of the race, which saw us catching the car in front by up to four seconds a lap. I hope we can continue this success in São Paulo and get another podium, maybe even get our first victory of the season!”

Aston Martin Racing Team Principal John Gaw summarises: “Following on from Silverstone, I’m confident that we have the pace that we need – we were the fastest in the GTE class over a race stint and the way the car enabled Stefan to chase down third place at the end of the race was incredible. However, the race leader still manages to pit one less time than the rest of us. Our plan is to push hard and use our pace to put us in the best possible position should we need to stop an extra time to refuel at the end.”

The Six Hours of São Paulo begins on Thursday 13 September with two 90-minute practice sessions starting at 11.00 and 15.30 local time. Qualifying takes place on Friday 14 September between 14.00 and 14.20 and the six-hour endurance race starts at 12.00 on Saturday 15 September.